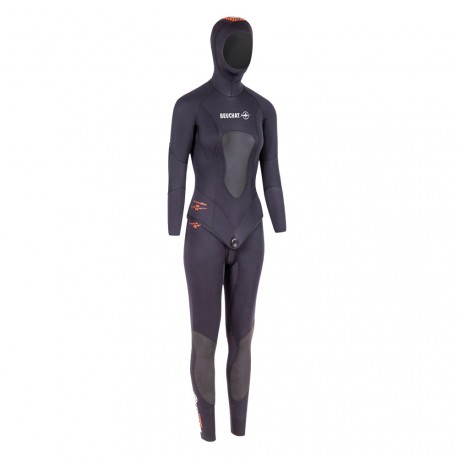 Thought and designed for lady spearfishers.

Beuchat, the inventor of the isothermal wetsuit and of the first ladies’ suit, introduces Athena suit, created and designed especially for women.

Large red strip on the hood to improve safety from the surface or by the teammate.

High quality pre-formed anatomical cut
Back-cut : special contours on the rear of the suit to avoid pockets developing on the back and between the shoulders.
One-piece face mask with no stitching on the chin
Beaver tail : ergonomic profile to avoid thickness between the thighs, 1-button fastening
PreCut System (Beuchat patent) : Long john style pants transformable into waist cut pants
PU reinforcements : non-slip 3D-Grip elbows, knees and chest with the Espadon monogram
Lower edge of the top reinforced for better resistance during dressing and undressing