The speargun is used to shoot fish, squid, octopi and other cephalopods. The gun should be chosen according to the style of spearfishing you practice and the location where you hunt.

For spearfishing under rocks or in caves, a speargun less than 750mm long will be easier to handle in cramped spaces, allowing access to the tightest nooks and crannies. For Indian style fishing, where the spearfisher swims above the fish near the surface, opt for a 750 to 900mm speargun. Blue water techniques – plunging straight down onto the fish - and bottom hunting – which involves lying in wait on the sea bottom using the terrain and the weeds to conceal yourself - require longer spearguns, between1050mm and 1250mm. Generally, the more visibility you have under water, the greater the advantage of using a larger sized speargun.

The different models of Beuchat spearguns are further differentiated by the characteristics of their barrels: by the materials used (aluminium, teak plus carbon, or carbon for extra lightness and rigidity as in the Marlin Carbone model), by the inclusion of a shaft-guide for greater accuracy and by the width of the tube - 25mm for a light, easy to handle version, or 28mm for more rigidity and improved balance.

Different speargun models offer different equipment. The Revo Concept is especially worth discovering: the exclusive patented Beuchat innovation of muzzle pulleys in conjunction with power band rigging and under-barrel recovery procures increased thrust along the entire length of the barrel. The increased power gives significantly faster spear speeds and improved accuracy. In addition the system appreciably reduces recoil at the moment of shooting. The Beuchat Revo Concept is fitted to the Marlin Carbone Revo Concept speargun.

This model, like all the Marlin Carbone Revo Concept, Marlin Carbone and Marlin Elite Red Line spearguns, has a head fitted with the Beuchat QRS fast shaft locking system.

Finally, the pistol grip also varies from one model of underwater speargun to another, offering various degrees of ergonomics and protection. For example, the fully ambidextrous pistol grip of the Marlin range is provided with a reel fixing system. This makes it easier to reel in heavy catches and reduces the risks in deep water freediving.

In addition to issues of performance, equipment levels and manoeuvrability, you should also be attentive to how silent your speargun is underwater: the Marlin Elite Red Line modelhas been designed to reduce operating noise significantly, especially at the moment of shooting, or in the event of impact against rocks. 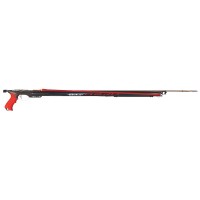