50 years after inventing the isothermal wetsuit, Beuchat continued to innovate on camouflaged wetsuits for spearfishing. Beuchat was the first brand to propose an innovative and unique 3D photographic camouflage created with a powerful trigonometric calculation software: the Trigocamo!

The Trigocamo is the 3D reconstruction of an underwater floor from real photos assembled by a trigonometric calculation software.
On the basis of several photos taken by a series of cameras with an area scan, we selected about fifty photos. They were then assembled on a trigonometry software which reconstituted the underwater bottom in 3 dimensions.

Thus on the Trigocamo camouflage each element is authentic and unique. No two rocks are the same throughout the entire suit.

This is how the Trigocamo camouflage was born and is used on the ROCKSEA.

To learn more about the design of the Trigocamo camouflage, watch the video: MAKING OF TRIGOCAMO

The Trigoblack's camouflage was created on the basis of the Trigocamo, with the addition of differentiating elements. The black and grey tones break up the silhouette and hide the spearfisher from the sight of his prey. The Trigoblack camouflage offers great discretion underwater, thanks to its dark tones but also its blurred effect which will bring a depth of field for a more efficient camouflage. 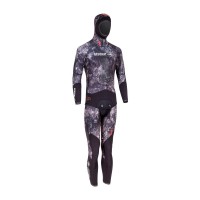